Skip to content
Into queer storytelling? Feeling like overflowing the cis-tem with disruptive fantasy? Write to me here for any collab proposition.
WHAT?
YOU’VE ENTERED THE PARALLEL COSMOS OF THE SASAHARA PAST LIVES 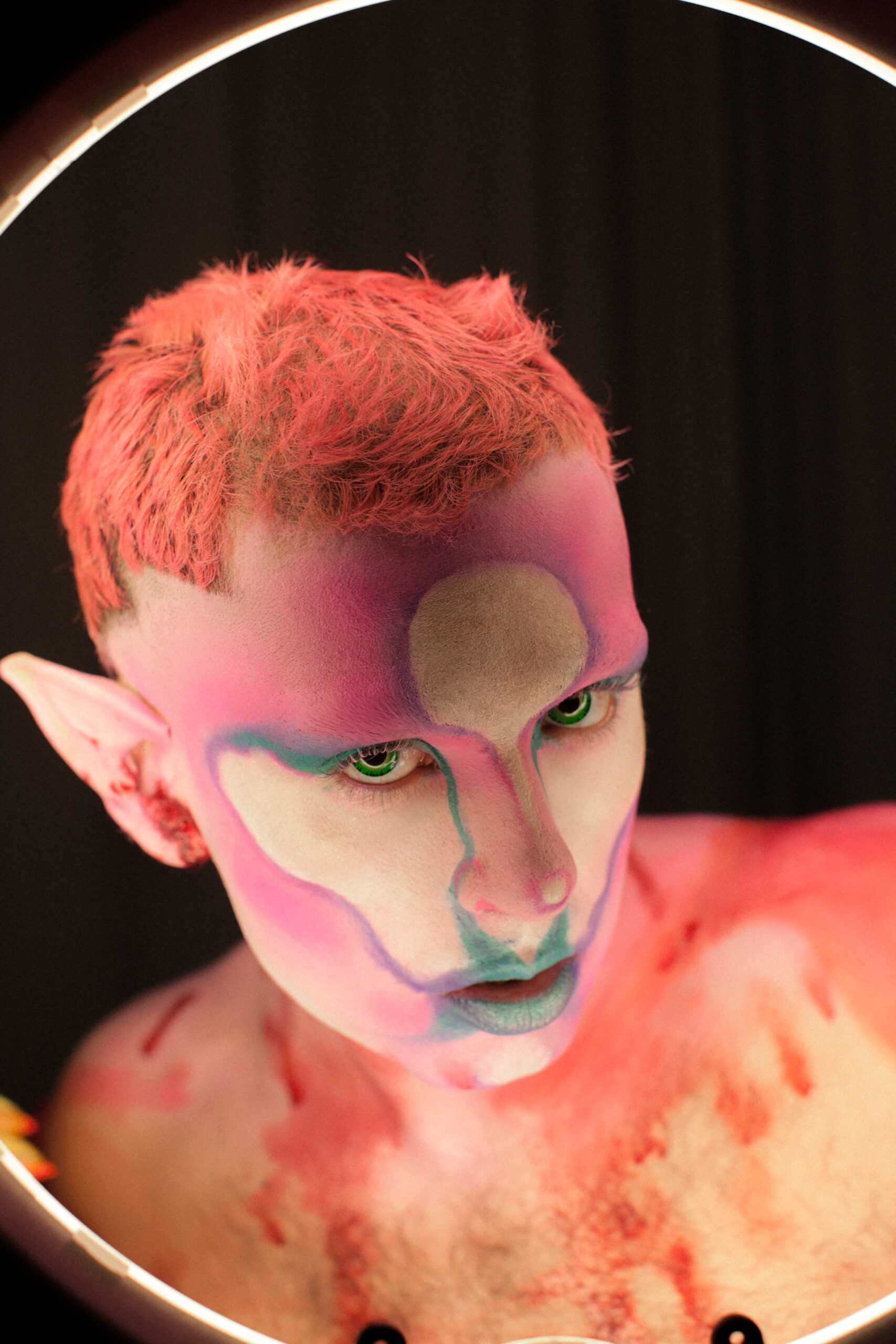 SASAHARA PAST LIVES is a queerophantasmic storytelling project using fantasy aesthetics to uphold queer narratives through text, drag, visual and audio work, and performance. It is a series of collaborations between the Amsterdam-based writer and drag-transformer SasaHara (FR) and various makers of Amsterdam and beyond. It is a base of work to start imagining a queer saga knitted of all the stories of the PAST LIVES.

“The Past Lives are like shed snakeskins; echoes of ancient narratives trapped in the present, dreaming of a future. Most of history is one-sided, marginalizing intersectional minorities for the benefit of a white cis-male gaze defining the spectrum in which events can exist. Fantasy storytelling is our alternative dimension, an infinite ocean. Queerness does not antagonize the gender-binary norms, it simply dilutes them in this ocean.
My drag transformism takes many forms, but mainly finds its source in fantasy references, from mythologies to fantasy literature and videogames. Within the PAST LIVES, each character I embody tells a story dealing with queer topics, ranging from identity to body politics and genderfluidity.

Mythologies shape imagination, give codes for metaphors, analogies, and dreams. My passion for the myth started from a very early age through great amounts of reading. I realized the lack of queer representation in most of the referenced myths when developing my work as a queer performer. Though non-binary gender approaches existed in ancient believes, it seems the culturally dominant mythologies were archived in writing, and the forces at work in the transfer from oral storytelling to written myth mostly kept queer narratives out. I believe this lack of representation holds an important place in the marginalization of the queer experience. Being a queer non-binary POC, I suffer from this gatekeeping, and have thus decided to make these mythologies myself and explore the politics at stake in this marginalization. ” SasaHara (they/them)

Fantasy literature finds its roots in ancient mythology which acted as a way of explaining the functioning of nature, or in general the unknown, and was often orally transmitted. It then evolved on a later stage with the apparition of epic tales such as Gilgamesh, the Odyssey, the Iliad, Beowulf, and the Journey to the West amongst many others. These ancient beliefs and tales filled up an entire genre we now call fantasy, digging into the references of these old myths to create new narratives, or describe current events through a displaced perspective. It has abundantly influenced many subcultures through contemporary role-play games such as Dungeons and Dragons, videogames such as the Warcraft universe and comic literature like the super-heroes of Marvel.


“Mythology is a story of beginnings. Is an explanation for the unknown. And by unknown, I mean not permanently unknown. Things, that at the time of origin of mythos, were unknown, or at least, unknown by some. This is a real-life state of queer persons: being unknown, not permanently unknown. People, who at the origin of existence were unknown, or at least, unknown by some, though obviously known by themselves. That is to say queer persons have always been around as mythologies have always been around, though they have gone unknown, avoided, undiscussed, and so the mythologies concerning queerness have been (at least directly, as much as I know, though I know, I don’t know much about all mythologies) unknown, avoided, or undiscussed within the realm of mythology.” Queering Mythology, Queer Mythology, Mythologizing Queerness – Grey Grant (she/they)

SasaHara (1993 - French-Algerian - They/Them) is a creative born in Paris and based in Amsterdam since 2017. They work as a drag transformer and a writer, playing with drag aesthetics in different formats (editorial, club, theater) to create queerophantasmic narratives. They find inspiration in ancient mythologies and transforms them in order to allow queer narratives to be a part of it, through fantasy writing or queer re-write of existing myth. Alongside their personal creation, SasaHara works as a creative producer (production, curation, PR, communication) for various artists and collectives. As a manager, they are interested in promoting communality through art and upholding non-normative narratives. They are currently studying at the Sandberg Instituut within the Re:master Opera program.

After having graduated with honours from the Sorbonne University in Paris (Master’s degree in Cultural Economics, Master’s degree in Management of Cultural Projects in the Public Space), and worked at the Centre Georges Pompidou and the Palais de Tokyo, Alain Chaney moved to Amsterdam and started working as project manager for the masharu studio. Alongside their studio position, they have developed an affinity for drag-transformism, SasaHara was born. They have worked as a doorhost in the nightclub Shelter, while participating in many drag events through Amsterdam, often in the Club Church owned by the House of Hopelezz. SasaHara has become the alias allowing them to knit together all these eclectic simultaneous developments.

Drawing on the nurtured imagination of their editorial story-telling creations, tapping into the sense of community inherited from their belonging in the nightlife and drag-family, and tinkering these elements together through their managerial skillset, SasaHara creates, supports, and acts within the queer community and for its non-conforming agents. The website design and exhibition in the Club chUrch have been made possible thanks to the support of the Amsterdams Fonds voor de Kunst. Special thanks to my crew of Queer Arcana without whom I wouldn't have dared joining my nerd culture and my queer art together, to Ankita Tobit for sparkling the idea of taking my work to the next level, to Roxane Mbanga-Neuilly for her kind and constant support and help with some photographing, to Luca Barbieri for giving life to my visual dreams and for his love and support, to Lucia Fernandez-Santoro for her attentive reading and critical help on the text writing, to Club chUrch in the name of Jennifer Hopelezz and Anne Rodemond for supporting my project and offering it a space, and last but not least thanks to Aurélien Lepetit for the incredible inputs on the exhibition design and his support and friendship. 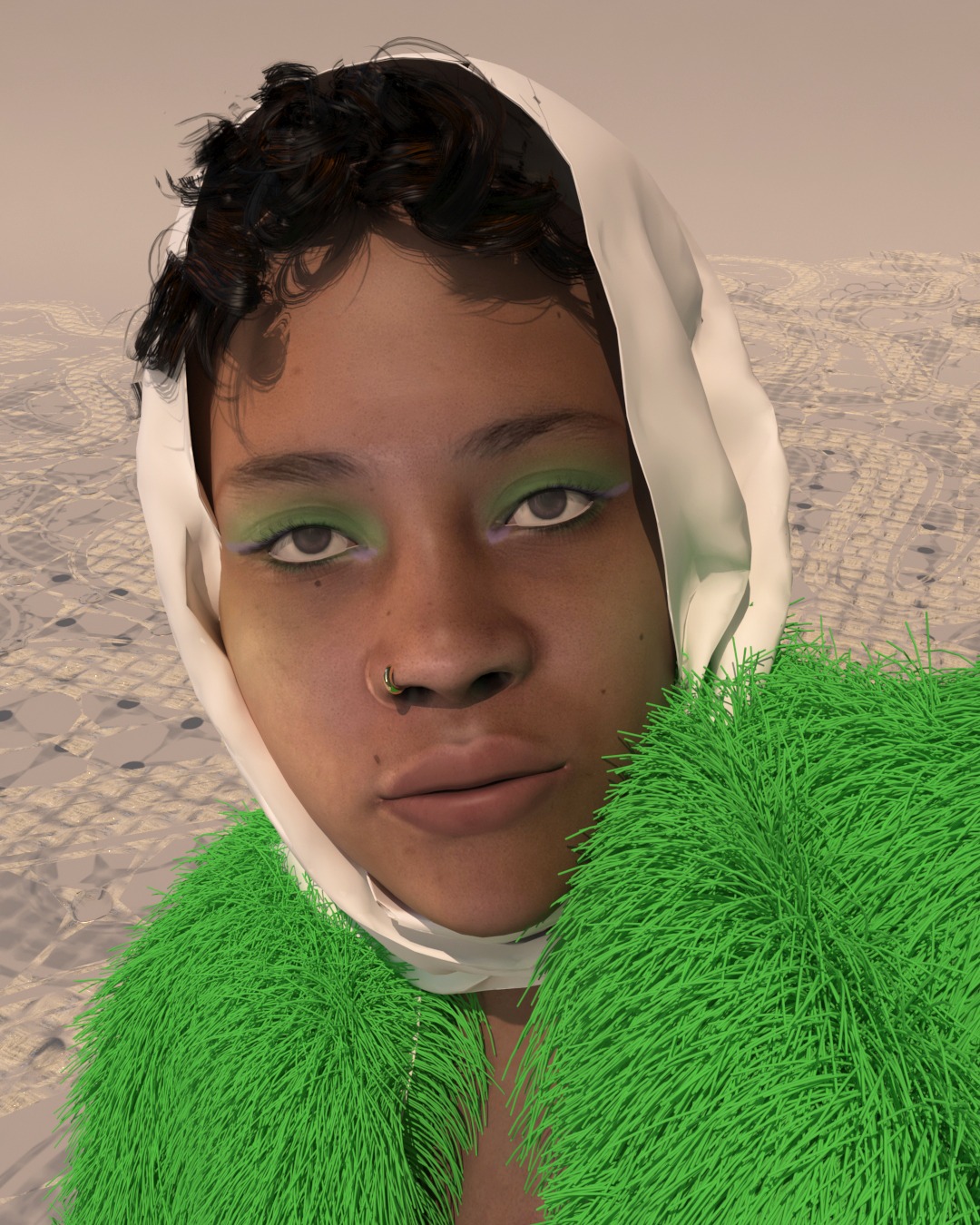 Anke Sondi (She/Her) is a digital artist and multi-disciplinary graphic designer from Germany, born in Cameroon and based in the Netherlands. Her work deals with notions of home, memory, identity, belonging and heritage. She utilizes new technologies as a tool for investigating and storytelling –with a focus on 3D softwares– whilst simultaneously contrasting them with analogue techniques. Through these technologies she creates spaces where memory, ancestry and imagination enter into being.

In her work, Anke Sondi explores the use of imagination as a form of resistance. Fuelled by the question "Who has the right to fiction?," she investigates the concept of world building outside of white patriarchy that centers the body. In these hybrid spaces she examines new modes of being, using imagination as a tool for liberation. 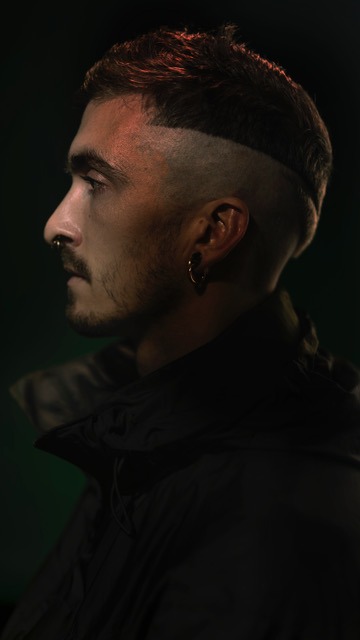 Aurélien Lepetit (He/They/S'he) is an artist and designer based in Amsterdam. S’he graduated from École Nationale Supérieure des Beaux-arts de Lyon (FR) with a DNAP (BA) in Set-, Stage- and Exhibition Design and a DNSEP (MA) in Spatial Design. After studying design at the School of Design of the East China Normal University in Shanghai (CN), they pursued an MA at the Dirty Art Department, Sandberg Instituut in Amsterdam. S’he has worked as ass-, co- and coordinator of the Dirty Art Department & Producer-Project Coordinator at the Sandberg Instituut. S’he assisted the curation, exhibition design and application subsidy process of the curatorial programme at iso Amsterdam from 2017 until 2020. Today, they are currently focusing on their artistic practice as a multi-track approach on gestures related to labour, performing productivity and feeling of guilt. They are merging physical and digital techniques and crafts ; while curating and collaboration on the online interventions ‘Speed Series’ initiated post-burnout as a way to bring awareness about the consequences of hyper and accelerated realities.
www.aurelienlepetit.com 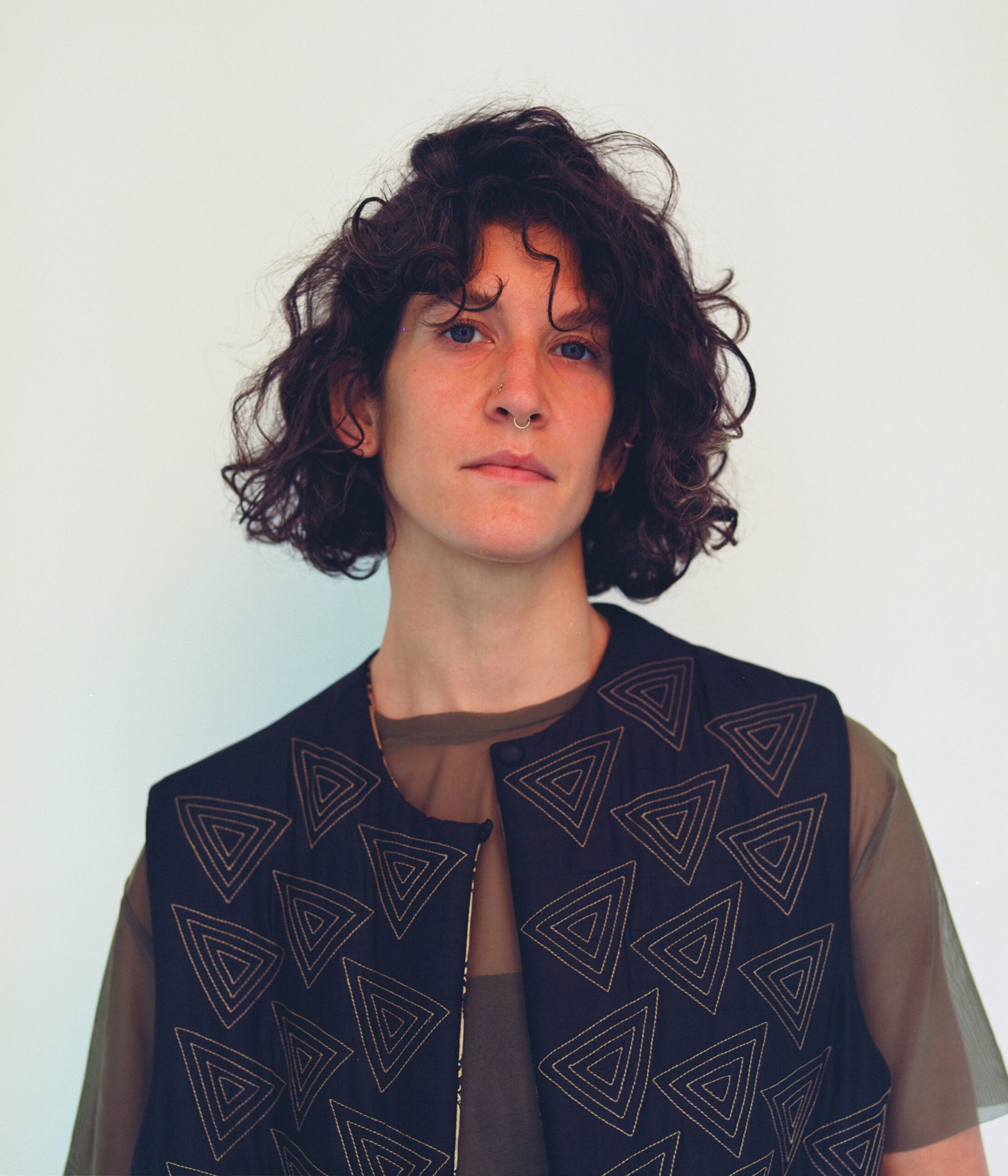 Lucia Fernandez Santoro (She/Her - AR/FR) is an academically trained dancer and performer who seeks redefinitions of performance, stage settings, and audience.⁠ Through her work, she uses pseudo-sci-fi short stories as a way of transgressing contemporary structures and relationships into alternative and playful constellations of new ways of living and loving. Her physical practices of dance and choreography operate on instinctive levels of compositional creation whilst her written narratives and poems often serve as the generators, starting points and conceptual frameworks of the eventual material works.⁠
As a way to fight for and dialogue on working conditions in the dance/performing arts field she started writing reviews and commentary pieces about performance and dance. In addition to regularly working as a performer, she specialized in concept development, dramaturgical support and general production. She also worked as a door host and stage manager for Amsterdam’s biggest clubs and techno parties.
Always maintaining rigorous physical training in parallel to her diverse artistic practices, she is a certified reformer pilates and yoga instructor and gives workshops on improvisation tools, for writing, movement and choreographic works, as a flexible and porous methodology for creation.
Her multiple occupations serve and inform one another to develop a critical and comprehensive voice. 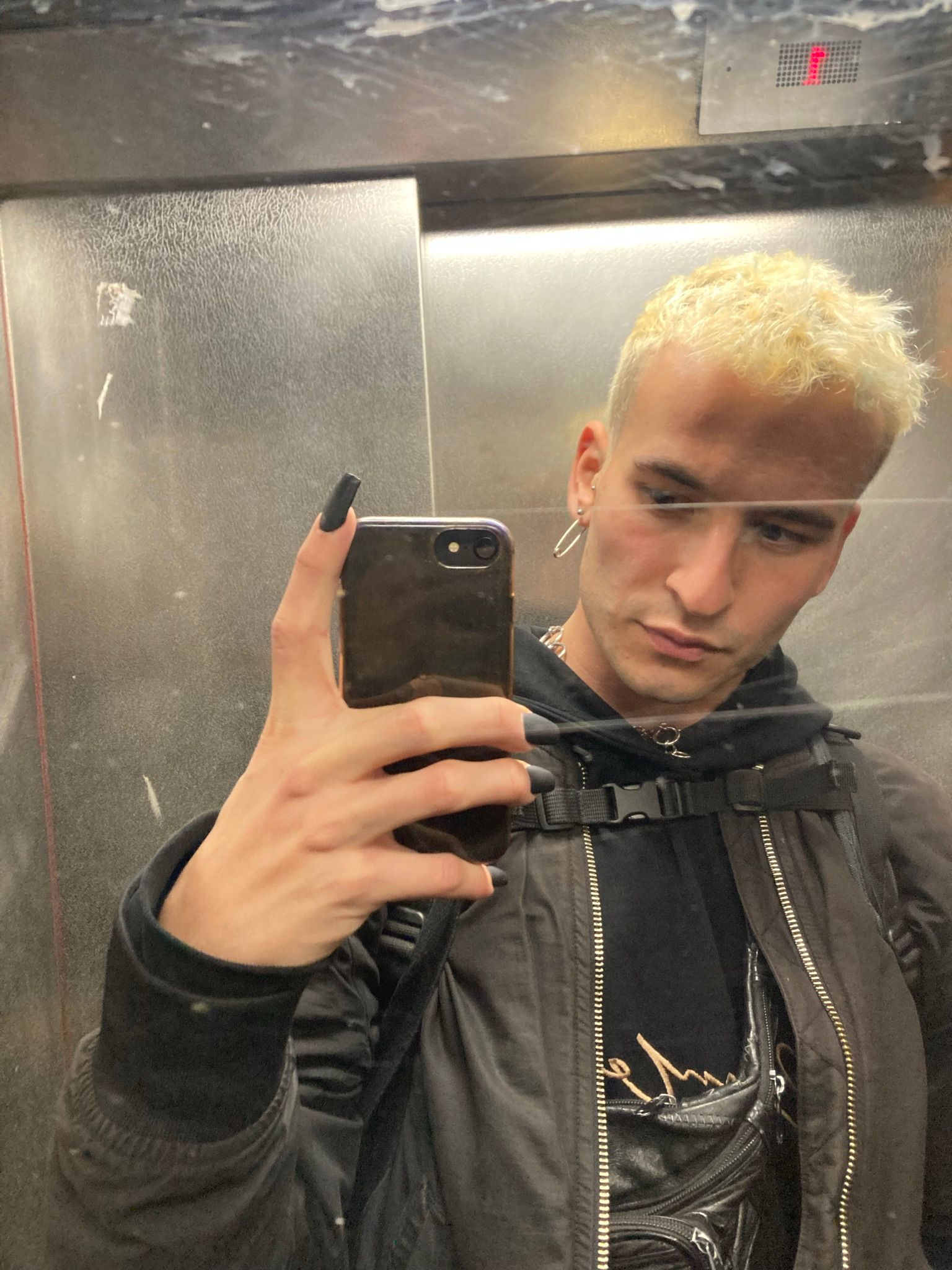 Luca Barbieri - Art direction and design of the collages 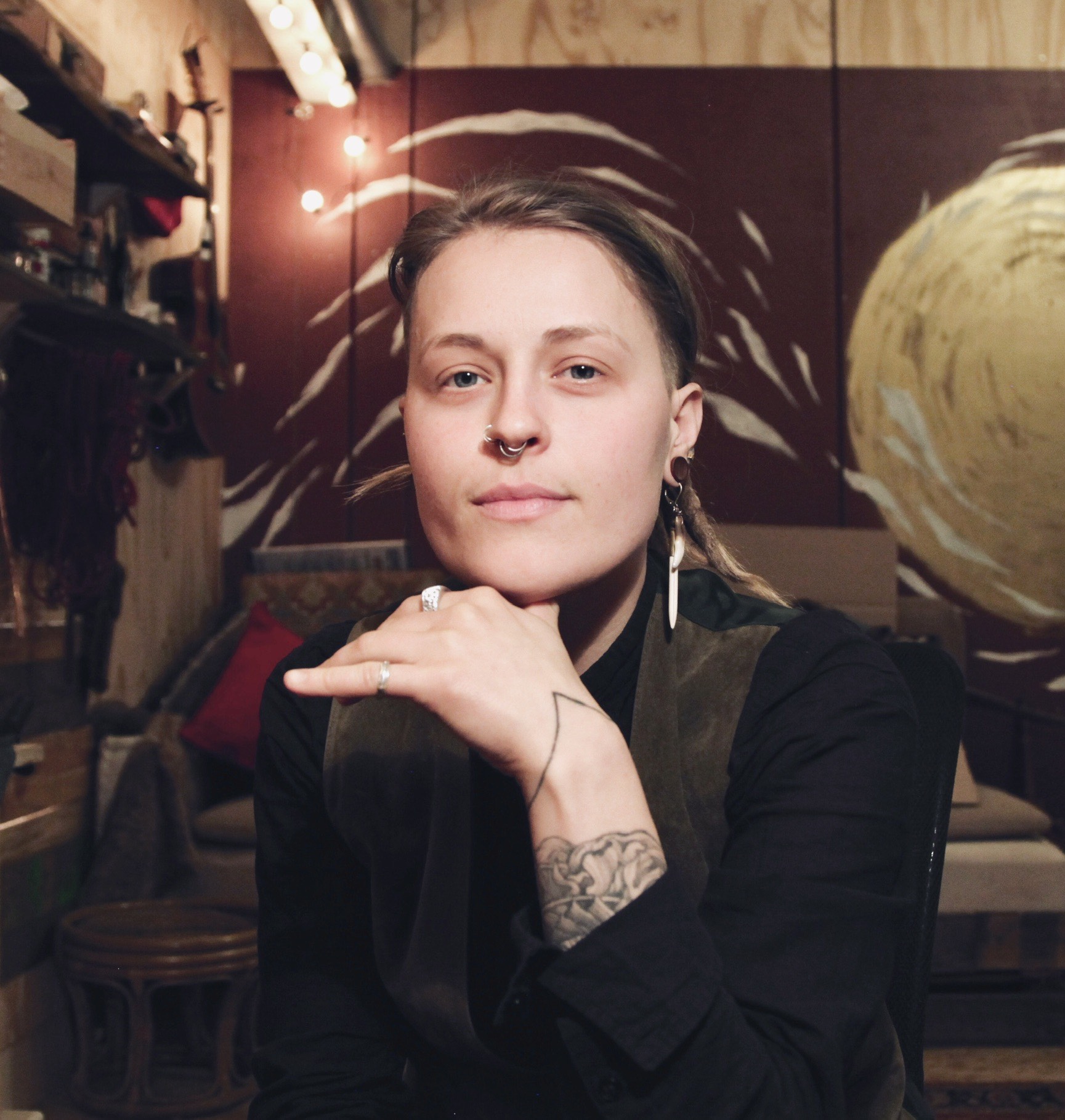 Ramsay Drover (They/Them) is an Amsterdam based illustrator, designer, painter, tattooer, and nonsense creator. Best described as a queer and kinky "jack-of-all-trades", or better yet, a Wild Weirdo, their atelier is a studio specialising in all things fetish, leather, wooden and whipping. In their most fruitful project to date, a Victorian-vintage aesthetic meets modern impact play as their handcrafted flogger series (made from all recycled materials). In 2018 they combined their skilled craftsmanship with traditional bondage rope techniques and began practicing Shibari as both an art form and therapeutic tool. Rope bound bodies are the main figures haunting their canvases which you can see at @ramzart191 on Instagram or at www.ramzart.ca