Like a psychosomatic fantasy, the furious clamour of the crowd echoes in her mind. The anguished thrill of the stage is forever part of her, a parasitic fusion with her DNA. Just as a past life haunting her like an inescapable loop, an enclosed Arena. 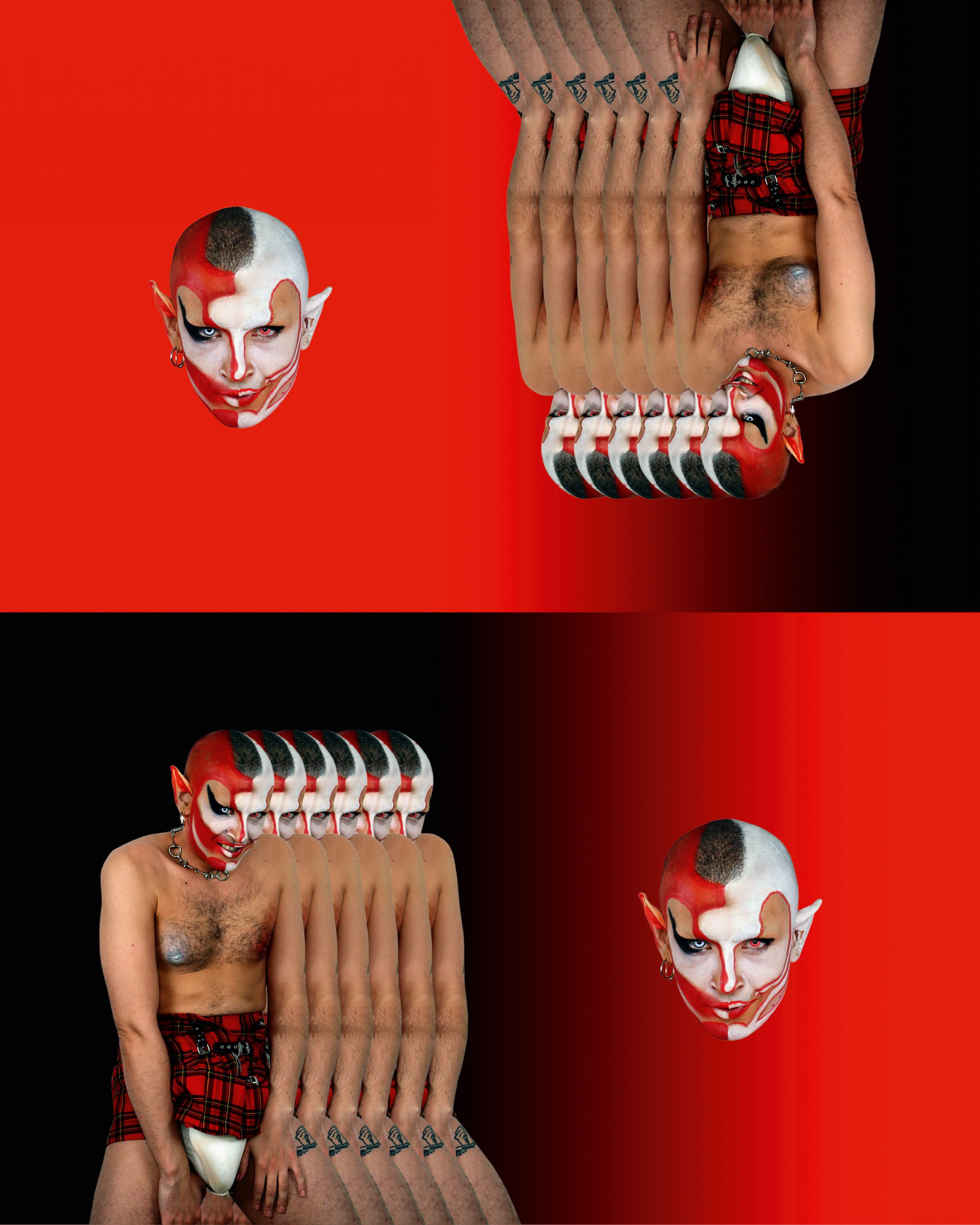 It always starts with fear. A primordial terror tightening her guts in an impossible knot. There she stands, paralysed, motionless, the heavy charge of a sacred duty weighing her down. A dark hole is sucking her, like a mighty gravitational force blocking her every intention.

Suddenly, the light is gone, and the darkness rules for the eternity of a second. The fragile cosmic balance has been shattered and it always feels like an ending, as if there was no escaping the black hole.

It always starts with fear. 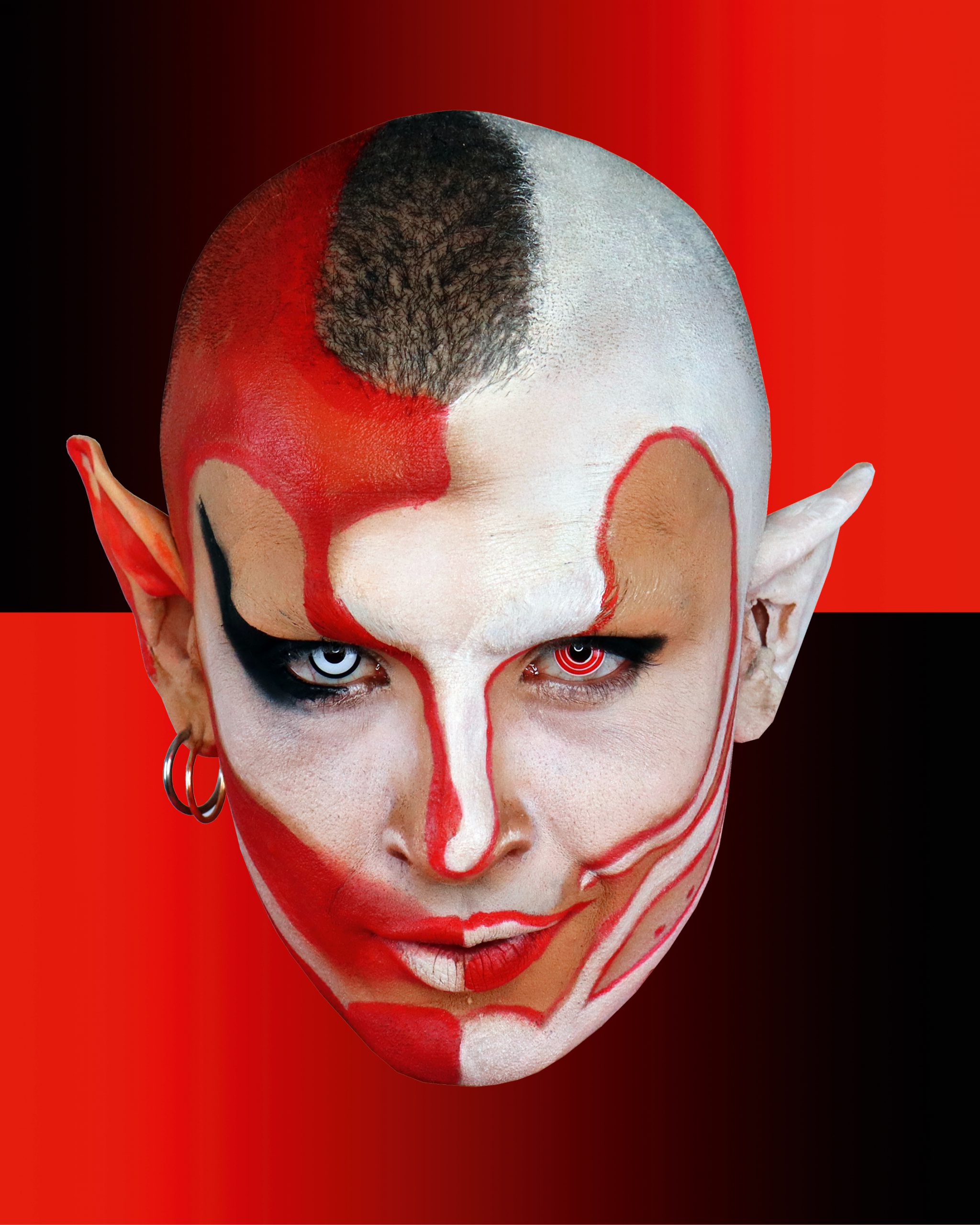 And yet, every single time a sour redemption takes her out of the dark, back into the light: a melancholic unchosen stardom.
The cycle continues, a tale old as time itself. As the last bit of her consciousness is about to vanish in the dark, a surge of power fills her from within. Sunrays blast, illuminating her, bathing her perimeter only to burn her alive. There she is, the lighthouse of the abyss. Sometimes she wonders, wouldn’t it be preferable to disappear in the void? Praying for the light never to come back?

The Arena welcomes her. The enslaved phoenix rises back from the ashes, and it must fight. Her voice pierces the shadows, her weapon of choice. The expert gladiator is back in the never escaped prison of the Arena. There she must fight, fight to exist. The combat must go on, the crowd’s carnal desire must be pleased. Their salivating howls reverb on the walls, soundwaves shattering her bones, undressing her soul. Their screams doping her mind, the fighting instincts take over. Her fluid reality is preyed on, cast away in the shadows she is now forced into the light, subject to the mighty tidal waves of their attention. The unwanted power burns her eyes, she hurls demented incantations, lost to the insanity of the Arena. 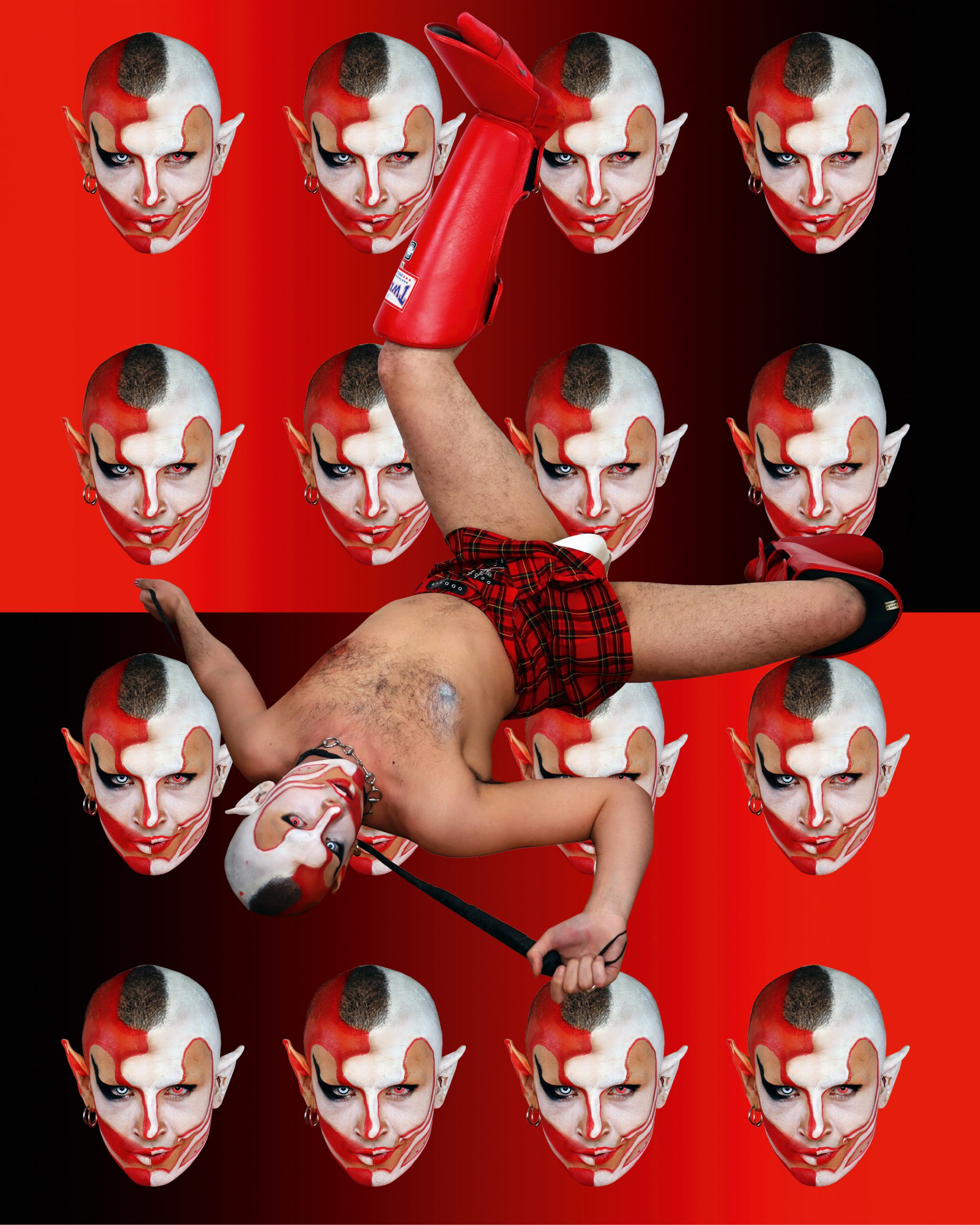 She knows every move, learned the choreography by force of habit. The carnivorous crowd challenges her to the battle royale. 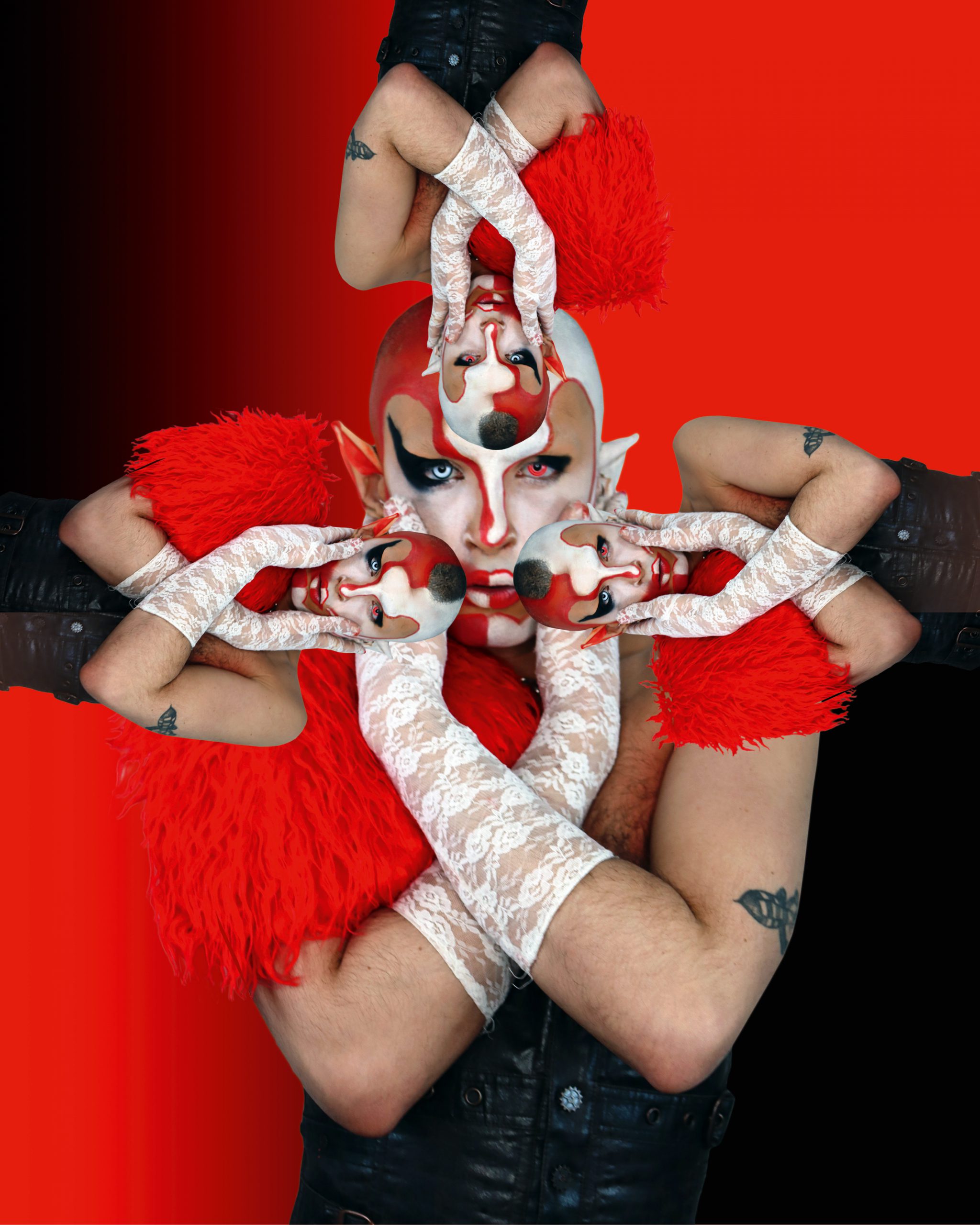 The last moans of the satisfied crowd eventually fill the air, announcing the curtain drop. Her heartbeat still runs 200 bpm, her breathing almost chokes her.

Feverishly looking around, she scouts the area to avoid any final ambush, but her last opponent has already vanished within the ground, just another illusion.

Quietly, she leaves the Arena through the main door. She won, and yet feels defeated, starring in her own bitter pantomime.

One can only contemplate the stillness of nature and meditate on its teachings. Its seemingly quiet composure inspires tales of peace and slowness. Or so it seems. But the story to be told here is one of anger and fight. For no abuse shall go unpunished as long as the proud trees of the sylva stand tall, rooted in the heart of the Earth.

I remember a time when all was chlorophyllian.
Green, brown, blue, the pallet was simple. A constant motion of life and death flowed undisturbed. The riverbeds were full, the waves happily slashed the shores and the giggles of the Naiads playing in the current stretched to the skies. Rain would pour on the grasslands, filled with majestic herds hitting the ground with their hoofs like thunderstorms.
At times I would shrink myself inside of an infinitely small drop of water and follow its course as it went on its cycle around the Earth. Sitting at the front row, I would respectfully witness Nature’s grand design at work. 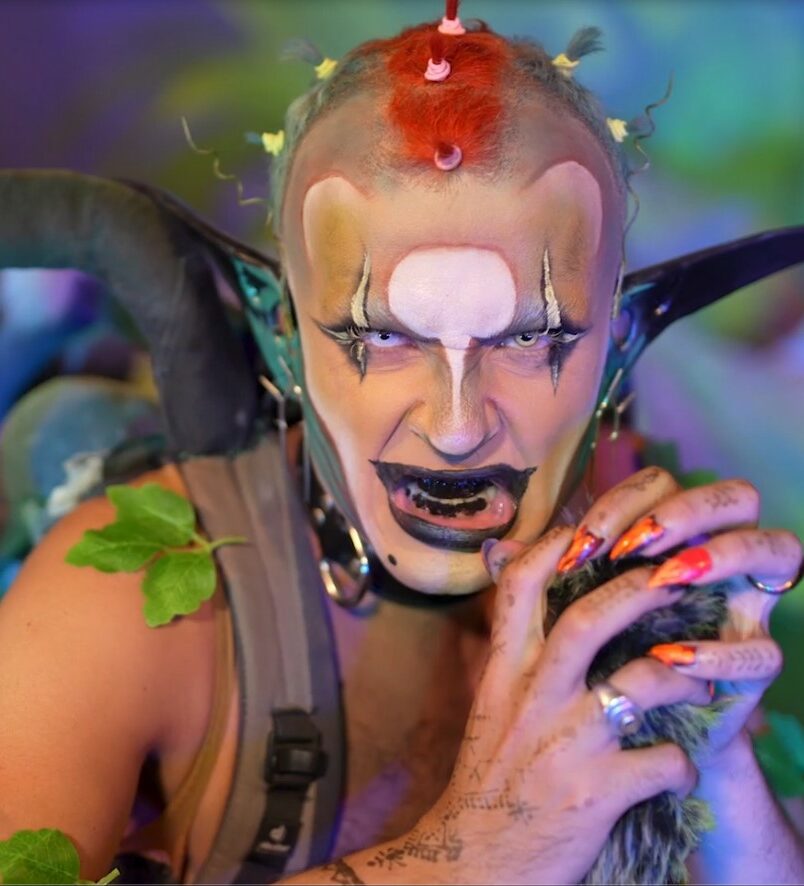 Back then, we all felt the belonging to the hivemind. Each individual path would lead to the collective. Overlooked by myriads of nymphs, the natural order was preserved. No space could possibly be bordered. Because the ice of the high mountains melts into the riverbeds of the forests to fill up our deep oceans: Oceanids, Nereids, Oreads and Dryads would all work together hand in hand. Nature’s spirit was alive, and well.
In the heart of the forest resided the source of our existence. A deep magic lied at its core, and we would all make sure not to cross it, for Gaia’s wrath is most ancient, and powerful. In this sacred place, great celebrations were held. Dionysian gatherings would take place during the full moon nights. Bathing in the moonlight, and filled with its celestial energy, all beings could morph in the shape they desired, and morph again as they pleased through these orgiastic nights. Roots would leave the earth and dance in the moist air of the forest, majestic verges celebrating their lust. Holes would become caves, hosting all the hungry limbs searching for friction. Bark to skin, leaf to feather, mucus to anus.
These celebrations weren’t only about pleasure. They held a very important role for the entire biosphere. During these fantastic full moon nights, we would all reconnect to the collective consciousness. Daily life had the tendency to draw us away from the common goal of symbiosis. And when all the bodies would press their flesh onto each other, be inside of one another, at this very moment we remembered we were One. Our hivemind potency would be restored, and Nature’s grand design could resume.


During one of these majestic nights, a primate decided to use the power of the moon to morph into a peculiar version of themself. Their back straightened, most of their fur fell to uncover a fragile skin and their hands became thinner but somehow more agile. The attention of everyone around was caught, intrigued by this new form they hadn’t seen before. The orgies that night were memorable, and this new vessel was at all times the centre of attention, indulging themself in this new found glory. As the night ended, all fantasy vanished with the fading of the moon and everyone went to their place of rest, fulfilled and at peace. Only the star of the night was unaccounted for, and everyone was sure they had found a glorious end. In her eternal garden, Gaia felt something breaking, as if her grand design had suddenly taken an unplanned route. The cycle had indeed been compromised, but no one knew that yet.
From this night on, the full moons seemed to lose their power. The riverbeds appeared emptier. No thunderstorms could be heard in the abandoned steppes. The nymphs would slow their work, finding so little to do that some became trees or flowers.

Lurking out of the shadows, the primate who had been the epicentre of a memorable night finally reappeared. Their outlook surprisingly remained the same as during that legendary night, defying the cyclic power of the moon. Pure hybris. They had hidden in the dark and designed a way to keep this ephemeral vessel, stealing a lunar beam and harvesting its power for the sake of self-love. Locked inside of a manufactured artefact, the celestial light would bump within its cage in en endless loop. The mutated primate used the moon’s stolen energy to create others, and slowly started to expand on the Earth, blooming in all its corners like an invasive bacterium.

Humans, as they called themselves, did not have any respect for Gaia’s work, they seemed to forget the grand cosmic order. Instead, they decided to play at being gods and did things as they pleased. What they seemed not to know is that divine power comes with divine responsibility. And when that balance shatters, payback is due.
Suddenly, all the oceans started boiling, and did so for a few weeks. Though the water temperature barely rose, as if something was only creating turmoil in the deep abysses. The entirety of the planet’s biosphere understood that Nature’s wrath was about to be unleashed, only not knowing when. Humans though would not pay attention, blinded by their quest of power.
Eventually, the deep seas opened all over the globe to let majestic pieces of land emerge, new islands appearing in every corner of the Earth. These new grounds appeared with fresh ecosystems, covered with gigantic flowers, lushy bushes and a large canopy letting some sunrays pass through to enrich the ground flora. Surprisingly, only butterflies seemed to inhabit these lands, but in numbers never witnessed. Their small beautiful wings flapping between the majestic trees of the islands. The swarms could cover the entire isles and make them appear like enormous fluttering monsters, brushed of thousand colours. Just as if an army was raising from the cold depth of the seas to the highest air streams. The humans, who had by then heard of rumours of Gaia’s anger for their unbridled expansion, laughed at the sight of these beautiful new landscapes. The other species of the Earth remained silent, humble in the face of the divine creation, slowly going in hiding where they could.

Flap, flap, flap, the little wings slash the surrounding air. Have you ever heard of the butterfly effect? Human screams echoed all over the planet, as the titanic tornadoes torn their bodies in hundreds of pieces, their egoistic temples annihilated. The statues of their leaders, once arrogantly standing and defying the forest’s higher trees, were now facing the ground, dismantled. A powerful magnetic field was being generated by the colliding hurricanes. Then started the storms, lightnings thick as rivers cracked open the earth, obliterating the human masses. Where the scraps of the narcissistic primates landed, flowers bloomed. Where their places of self-worship once were, trees grew.
Soon enough, the heresy of the Moon thief stood corrected and the life of the wild resumed. The delicate flowers that grew out of the dead humans were white, bearing six petals and a yellow core. They were called Narcissus, in memory of the excessive self-love that brought the primate to their own demise. From destruction bloomed creation. The one who sought eternal power was crushed by the Sylvanomachy, just another failed mutation absorbed and repurposed by planet Earth.

As I was witnessing the last corpse disappearing in the soil, my thoughts travelled back to my memory of the cosmic genesis. The little narcissus growing out of the decaying body reminded me of that spark of hope that always echoes through space and time at the birth of a planet. And for the eternity of a second, I was in All, and All was in I.

Just another failed mutation absorbed and repurposed by planet Earth. 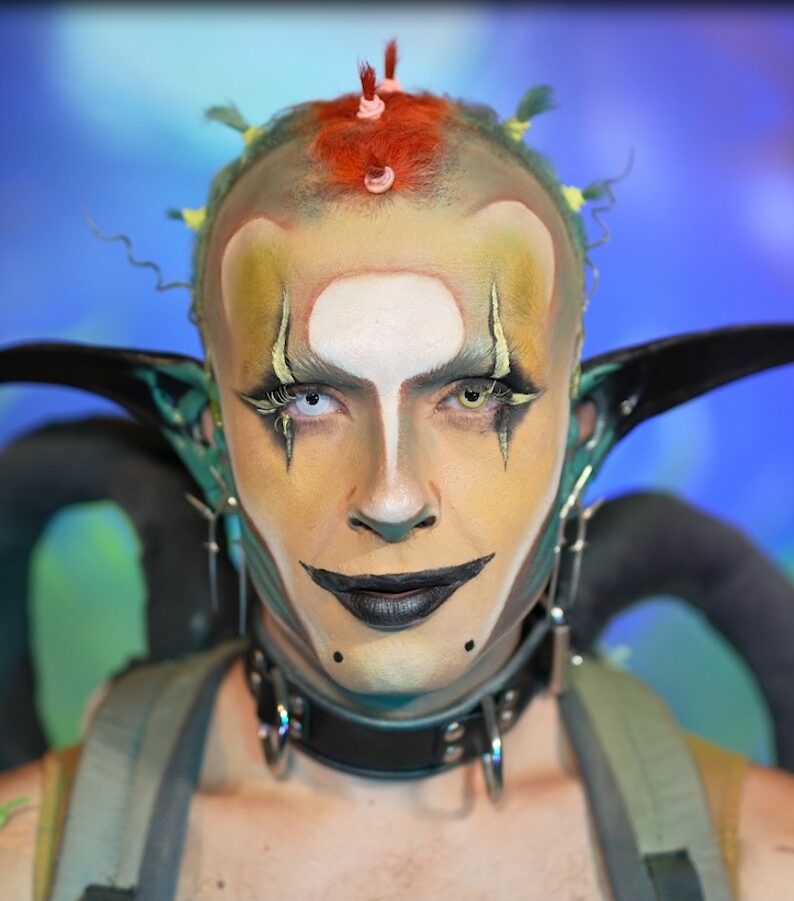